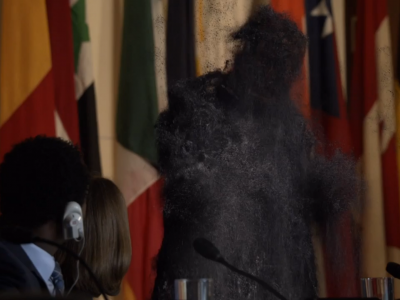 I'm always surprised by how easy it appears to gain access to secret meetings in high security buildings without anyone raising the alarm.

Where are the security services, cameras, checkpoints, armoured doors? Why aren't sensitive meetings held on the top floor of skyscrapers? Why does there always seem to be easy access via fire doors?

HYDRA agents brazenly walk into a UN meeting and start disintegrating people while Gen. Talbot is speaking. This sparks global outrage, which is the natural consequence of melting Italian ambassadors.

S.H.I.E.L.D. are splashed all over the news as terrorists. Talbot is answering to his "tame" senator, who happens to be Christian Ward, brother of Grant Ward who is currently being all concilliatory and cryptic in Coulson’s basement.

Newly returned Simmons recognises the weapons used from her HYDRA infiltration, and May, Morse and Hunter go searching for the HYDRA quartermaster that she identifies.

Much bickering between the ex's ensues. Strangely this tempers Hunter somewhat, and the one-sided whining now has a focus that makes him more sympathetic. I'm not sure if this is a good thing , I was enjoying calling him a dick every week, it feels like I've been robbed of a guilty pleasure.

The elder Ward brother makes a bid to get his hands on his sibling, and there's a very real suspicion that the family falsehood gene is strong with both of them.

Fitz and Simmons are united, and the broken scientist gets to let her know that he is not at all happy that he was abandoned in his time of need. He wants to know why, but she can't tell him. The real reason is revealed later with not a little emotion, but it’s still not revealed to Fitz.

In the meantime agents from both sides converge in Europe. Fisticuffs are on the cards when things go sour.

Whilst May slugs it out solo, the Morse and Hunter team show the qualities that ruin a good solid marriage...extreme violence, and making your (ex-)wife acknowledge that she owes you something. Think about these two items together. Then run away at high speed...

This episode felt a little flat. Not treading water exactly, there was plenty of action and intrigue, but this was moving pieces round the board to get them into position for something later, so although there was a lot of exposition and arc plot discussed, it didn't go anywhere until the last couple of minutes.

We get to see that both Ward brothers are nasty in their own way,the mystic symbols make an appearance in yet another place, and Gen Talbot starts to thaw out in his attitude to the S.H.I.E.L.D boys and girls.

There's a one-liner threat from a very unusual source, one that I really would like to see realised.

The Obelisk/Diviner doesn't directly appear, but the weapons used to melt the politico's are clearly derived from it. I hope the Obelisk does something more than just the transmutation/disintegration bit. If that's all it does, why bother with it, HYDRA can already turn people into coal dust without a problem?

So pieces slotting into place , it looks like we’ll be seing a few different plot threads in the coming weeks, possibly with two mad Doctors on one side and the two mad Grant brothers…

...on the same side as well