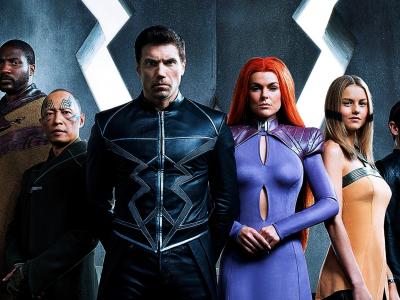 Another promising project, another let down. Spoilers to come

We meet out royal family on a technologically-shielded moon city, Attilan, and learn that they have been there for quite some time, after having fled from tensions on earth. The story then quickly proceeds to tear the protagonists apart and leave them scattered on earth to start their individual journeys. Meanwhile, Maximus, the rebel brother of king Black Bolt, is left to manipulate their home into his own.

The following 6 episodes are spent with our family forming bonds and enduring struggles of their own on earth including being lost in the wilderness, arrest, and experimentation. Through interaction with secondary characters, we learn of some of the backstory to the Inhumans and bit-by-bit they reassemble. Through a few obstacles, they return home to overthrow Maximus and take back their people.

The story’s strength lay within its integration into the wider MCU as well as its simplicity. Firstly, the series adapts the ‘Inhumans’ graphic novel in a very obvious but well done way with regards to the MCU canon. Attilan is moved to the moon yet there is still links with the oceans, the Inhuman outbreak in Agents of Shield is acknowledged and explained clearly, and the overall feel fits well. The simplicity of the basic story gives room to focus on characters and truly engaging moments which, sadly, aren’t often capitalised upon.

The weaknesses come with pacing and, specifically, how rushed the storyline is. We move very quickly from learning they exist to tearing them apart which leaves no resounding impact on the viewer. Why should we care if we don’t care about them? There’s also symbolic moments such as the removal of Medusa’s hair which are meaningless to the viewer as its importance is never established. The lack of establishment from the start makes it far less easy to appreciate the strengths that come later and ultimately serve as the story’s demise. Whilst there are great character moments and some revealing story it’s done in much more of a patching up way than setting the scene organically.

The characters are, surprisingly, pretty good. Black Bolt is done incredibly well considering his inability to speak. The use of signing coupled with physical mannerisms is compelling and testament to the actor. Medusa shows depth and a character arc which works well (once they explain her motives) and she has a lovely interaction with Black Bolt. Karnak, likewise, is complex and is given room and story which make you feel for the character. Ultimately, he’s the unsung hero of the show. I also include Maximus in the list of well-done characters despite being a tad underwhelming. He is essentially a watered-down Ramsey Boulton (Game of Thrones) and that’s clearly the role which got the actor this one. Given that, he is portrayed well and is more than a villain-because-villain that he could easily be. Lastly, Louise, a human scientist who stumbles upon Medusa and becomes her friend in the process. She is the best supporting character and one of the stand outs of the whole show. She progresses from functional through to having her own key moments which is fun and would have been nice to see more of.

The show utilises some good but mostly underwhelming visuals. Teleportation via Lockjaw or other means are well done and fit the theme. They are also slightly different from the portals and other means of transport we’ve seen in the rest of the MCU. Also, Karanak’s ability to see weakness in everything was incredibly well done and only added to how well portrayed his character was. Before setting on a plan, he can run through events (similar to that Nicolas Cage movie) and it’s shown like a series of schematics or a crime scene with pins and lines connecting events and locations. It’s difficult to convey in words something well shown visually so you’ll just have to trust me.

Beyond that, the visuals were a steady meh. The sets were fine, sort of what you’d expect, but most of the costumes were lacking. They felt more like they dropped the line towards good cosplay rather than high production media. I’m not sure what I expected but after the stunning costumes of the other tv shows (Daredevil, Agents of Shield) this was just a let down.

Overall, it just felt rushed on every level. The story could have done with being a 13 episode run and used the first 5 to establish our characters before ripping them apart. All of the characters would have got more depth and time then as opposed to 3-4 key ones. Likewise, with the visuals, more time would have allowed them to develop the look of other characters more. It, in all honesty, feels like the whole project was cancelled when the film was but then somebody demanded it return so they cobbled it all together just to tick a box. A sad state of affairs considering just how interesting the inhumans are and their potential role in the MCU. They integrate with what’s happened (Agents of Shield) and the Sokovia Accords (Civil War) as well as what’s coming such as the Kree-Skrull war (Captain Marvel) and the potential for one of theirs to be Thanos’ son Thane (Infinity War). Overall, a massive loss as I doubt this will be continued and the low ratings will probably cause Marvel’s TV arm to drop Inhumans in general.

Rating given because I feel it fell on the bad/meh boarder. It pulled in just slightly lower than Iron Fist because the latter at least told a single, simple story that albeit wasn’t engaging was still set up well. Inhumans, however, had the meh moments but did nothing to set itself up. A sad state of affairs for the Marvel TV universe as they are now only 5 for 10 in terms of strong shows. Perhaps they need to hand the reigns over to Cap Fiege and his film teams.