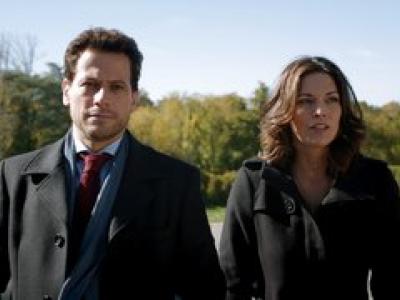 Well that was dull.

An uninteresting man, getting married to a boring woman, is killed in a tedious way.

He's wearing some clothes and they lead to a chain of events that include 40 minutes of nothing very interesting happening and the viewer getting restless for the end titles.

Thankfully, right at the end something arc related does occur, but it can't save this episode from being pretty much the worst of the season so far.

The premise is that a young couple are preparing their marriage. She an American socialite with a rich daddy, he a British Viscount. He's very soon dead in a park with a big hole in his neck, bloodless rather than chinless.

Ok, lets flip a coin and see which of the two mens' names that Hollywood scriptwriters think posh English men have we will be using this week...and it's...

Henry is called and he immediately uses his Encyclopedic British Nobility knowledge (like we all have, right?) to debunk the corpse' identity. He also recognizes the stitching in the expensive suit that the stiff is wearing and knows that it's only used by one tailor in New York. His own (yeah,right).

Investigating at the tailor's, he identifies the occupation of the nobbled noble which leads to him to the family that he was marrying into. Turns out he was a con artist and not a fine upstanding paragon of moral virtue like a British Noble (ahem). /p>

Then it's a straightforward who-dunnit up until the very end of the episode , and includes the shortest attempted escape on foot I've ever seen on tv, about 5 steps (I didn't count), before being tackled to the ground.

In other news, Abe decides to hit on an old flame at the funeral of her recently deceased husband. This is to show flashbacks of how she was his first kiss, but he couldn't keep the relationship going as the Morgan family had to do a runner after Henry was recognised by someone who saw him die ten years earlier.

And just to prove that Det.Martinez has become both dull and stupid, she completely fails to be suspicious of Henry after finding out he uses one of the most expensive tailors in the city because he says he's saved up a bit of money.

There's also a 'twist' to the murder case that you can see coming from so far away, you could go out for an evening meal followed by night clubbing, a good night's sleep, a hearty breakfast and morning at the gym before it gets to you.

It is also actually only the very last scene, which ends on a cliffhanger that stops the viewer from being totally asleep by the time the credits roll. I'm going to presume they pulled it forward from the next episode after realizing how dull this episode was.

Got to do better than this Forever or you will need to speak up over all of the snoring.