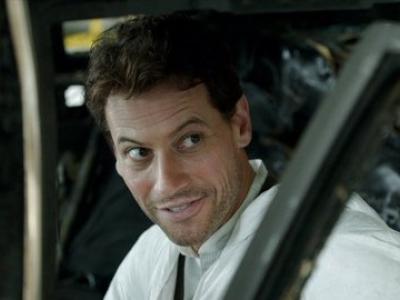 If music be the food of love...

Then throttling someone to death in their car with a double bass string and then  torching the car and victim would be what exactly ?

The connection is a song.

The titular 6 A.M. a famous Jazz track that made the fortunes of a few, and being Jazz, probably bemused almost everyone else in the world, and will have prompted the age old question about this particular style of music...

The accredited writer of this Jazzy phenomenon is challenged by the son of an old colleague who is claiming proof that his father was the real song author. This is what gets him garrotted and toasted.

Daddy Jazz player (Pepper) is tracked down at his permanent gig as a public transport system busker, down on his luck and despairing of his son's dodgy behaviour which is what he believes got him killed. Henry resolves to prove who wrote the song and solve the murder .

Abe and Henry argue over whether Jazz is proper music (apparently some people think it is ! I know , who'd have thought it !). This is done as a typical teenage /father/affair and seems completely out of place in this series, Abe and Henry have never bickered as Dad and Son , it's jarring. It also doesn't fit with the flashbacks of a young Abe getting Jazz tuition on the piano from a neighbour, and an eventually approving Henry.

There are other problems too. A lot of the characters this week seem to be one dimensional stereotypes, and borderline racist ones at that.

And of course that's the "good side" of the African-American community. Almost everyone else, including the victim is a scheming , conniving, probably thieving , slimy bastard. Feeling uncomfortable yet ? In fact the only two sympathetic  non-police characters in the murder enquiry are Pepper and his estranged daughter. It's not a good message and made me feel queasy after watching it.

I also have a bit of a problem with some of the science (the heating and cooling of the body seems a bit dodgy). I also have looked up the bit about cooking audio tape to restore it and that is apparently TRUE !  I will be cooking my daughter's One Direction CD's . I might have to make it really HOT, to "IMPROVE" them obviously.

Again, this week no arc stuff , and it all felt a bit too much like a filler episode.