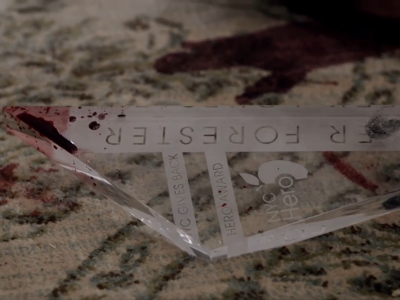 You're born to a billionaire family, become a self-impoverished philanthropist doctor treating the poor of New York.

You end up receiving an award and it goes straight to your head.

Through the skull and into the brain in fact.

No misconceptions here, no trying to hide that it's a murder.

Henry and Jo investigate the wealthy college friends of the dead doctor, and instantly you don't like any of them. There's "Jittery coke-head boy" , "Arrogant lawyer girl" and "Slimy corporate tosser lad". Not one sympathetic character among them. Yes, the rich are wankers,and if you renounce your wealth for altruistic reasons then your reward can only be a pointy crystal trophy straight into the cerebellum.

The investigations centre around a date tattooed on the dead mans chest and a secret from years before.

Secrets figure large in this and there's a thing that is buried. They're trying for subtle allegory, but it comes across like Brian Blessed with a megaphone SHOUTING about how subtle he is.

There's a parallel in the past, with a flashback to what prompted Henry to give up general medicine and adopt a wholly cadaver clientele. Henry witnesses a street shooting and tries to help but also ends up in the firing line.

I have a problem with this. Not as a piece of narrative, but the reason given at the end of the episode cannot possibly fit into Henry's life logically. I can't say more without spoiling it, but if you think that Henry has been a doctor in a war zone, then he must have come across this situation before.

Elsewhere, Lt "What's-her-name-again?" is concerned about Jo's mental health after killing the psychopath last week. Finally, something for the second string characters to do other than stand around being impressed by Henry.

Unfortunately, this subplot is a bit ham-fisted, there's also a periphery character in the main plot that is introduced in such a way that I was instantly suspicious. It's sometimes unavoidable in a weekly tv show, but it took too long to introduce him for what was supposed to be a minor line on enquiry, and the alarm bells sounded.

It would have been better to have rolled out Jo's issues over killing over a couple of weeks rather than introduce and conclude it in the same episode.Still, I'm glad that I'm not the only one that has noticed that it's time for the other characters to get some airtime.

However,Lucas still appears to be completely superfluous "Comic" relief, no point to him, get rid.

None of the bigger arc plot this week, so we're essentially back at killer of the week.

Henry does however die in this again (two in two weeks) , and we see him pop up in a different setting.  Does he always come back in rivers, or will he be popping up naked in a public swimming pool at some point?

Now that I mentioned Brian Blessed earlier, I really want him as a bystander pointing and shouting at the resurrected doctor shouting ...