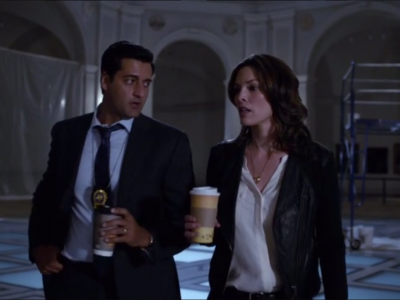 Take one tv series that already could be accused of including too many things from other sources and...

It's not only Immortals that are having a bad time.

The wealthy are all having terrible lives.

It's an old trope, and presumably one to make the rest of us feel better, that the rich are all at each other's throats all of the time, absolutely nothing makes them happy, especially their wealth, this makes them horrible and unpopular and we can all cheer when they die horribly.

This week,we start in an art gallery at a swish function. Through this wanders an elderly upper-class harridan spitting verbal venom at anyone in rage as she stomps (quite feat whilst using a cane) about the place. You can tell it's going to end well can't you?

One brutally bludgeoned, battered bitch, broken-boned on the gallery floor.

The police arrive in the early hours of the morning, you can tell this because they arrive with large cups of coffee, I mean REALLY big cups, it must be REALLY, REALLY LATE/EARLY.

There must be some sort of convention, maybe it's like the old wax candle clocks in reverse? So, that would maybe mean that it's an inch of coffee per hour. I hope they don't run on the 24hr clock, and I suppose that in the early hours of the morning they're on Espressos, you know really small coffees, but very high on punch. I think I'm on to something ! It's going to be like using moss on trees to determine where North is. If you want to know the time check a cop's coffee! We need a chart, I'm off to the PC to fire up Kickstarter.

So obviously it's time for Henry to step in and poke the body so he can tell everyone exactly what's going on... yeah, yeah...

Henry doesn't show, and it's left to (chronically incompetent assistant) Lucas to make the examination and pronunciation of cause. Then, being chronically incompetent as he is, he gives his opinion to a journalst, and the only way to save his career (though why anyone would want to is beyond me) is for Henry to take the blame and be kicked off the case.

A bit different this week, I'm glad, it breaks things up a bit. Of course he isn't going to stay away, particularly as he knew the evil old hag when she was young and not / less bitter.

Because he isn't allowed near the body, or crime scene, it means that Abe and Lucas get a bit more to do, but most strikingly, detective Martinez seems to have woken up.  It must be all of that coffee! She's back to being more like she was in the pilot, a bit more obnoxious, more useful and a lot more likeable. Perhaps a job in a café might be more appropriate, now that's a cop show - "The Barrista and The Body Whisperer".

We also get a look at Abe's arch enemy antique dealing brothers, who have the audacity to try and ask Henry to be the regular house clearers for his cases, with no qualms about the corpses as long as they can get their hands on the loot. Nice !

Similar layout of plot to previous weeks but a different denouement. Good, we can't keep going as we have been doing, keep changing!

There are some flashbacks to Henry's past which show more of his relationship with his wife, and are integral to this week's episode. They also give us a reason why he doesn't show up to the death in the first instance.

No death for Henry this week, that's two in a row, if he keeps going on like this he'll be living Forever.

So all in all a better episode than last week, I'm off to celebrate with a Latte.