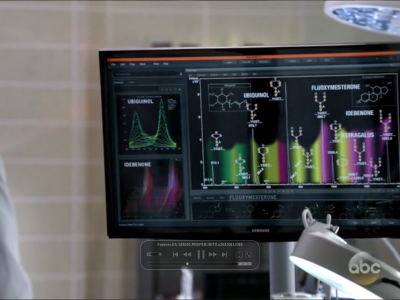 I learned something from this episode.

If you are going to watch an episode that includes mysterious medications with lots of allegedly cutting edge science, then whatever you do...

DON'T watch it with a scientist.

When it becomes obvious that there are going to be scientific terms used, there are a few oooh's the occasional ah ! And then. "You don't get software that does that, they buy their software at the same place as CSI;MIAMI", "Can you see a 'Fluorine' in that chemical structure?". This then progresses into a stony silence until the RAGE takes over. For this episode the RAGE hit its peak with a gory bodily mutilation and the on screen explanation. This generated a loud "OH COME ON ! SAYING SOMETHING IS A COMPLEX DOOBURY DOESN'T MAKE IT MORE SCIENCE-Y"

So how does science feature this week?

A mugging on the street goes pair-shaped as a man in his sixties appears to get the upper hand over a youthful robber. After giving the young guy a piece of his mind (or rather a lot of his fist), our aged vigilante has a seizure and ends up on Henry's slab.

The old man has a young physique and a very old brain (which we get to see).

This leads us to a secret medical clinic giving treatments to the ultra-wealthy, where vitality is restored through food supplements / replacements.

There's a weird procedural process on show here.  The route to the clinic starts with a business card from the deceased mugee's briefcase. A briefcase which the police need permission to open, which seems odd when they didn't need permission to cut open the chest of the victim or to remove his brain.  Or to put it another way, "Yes, you can dissect dad, but don't touch his post-it notes"!

This episode gives us an extended visit to the past, paralleling the ongoing events of the day, with Henry and a medical colleague discussing the progression of medicine and it's comparison to charlatanism.

Of course the medical treatment isn't as safe as it seems and the team need to track down the ingredients and the creator.

It can't be like anything else they sell in the USA from a medicinal perspective, even on TV the usual adds for "Meds" contain 30 seconds of the virtues of the product followed by 4 hours of side effects.

Detective Martinez doesn't do anything again this week. Yawn.

Abe makes more comments that roughly translate into "I'm not getting any younger you know, I'm eventually going to die". This week he adds the question "Do really want to die ?" to Henry. Judd Hirsch is great, and they're obviously trying to get him a bit more to do, with mention of his Nemesis, a pair of antique dealing brothers . Mind you I can't see how he manages to make any money though, as he never seems to open his store, and for the first time this week there are a couple of customers in the shop that Henry promptly throws out.

There's another medical analogy as well, one that's becoming very prevalent in this series, although Forever is far from being the only to show that rehashes it WEEK AFTER WEEK.

Every week, the structure is roughly the same and you can probably swap a criminal suspect for a suspected medical condition and get a very similar show.

A thing happens that means someone dies, Henry investigates to show that it wasn't what everyone thought, someone is identified as a suspect, someone gets arrested, Henry asks pertinent science-y questions and we find that the arrested party is innocent.

This series is REALLY stacking up the clichés.

C'mon guys get creative, give the guy some life (pun intended), immortality cannot just be whining and being miserable and getting no joy out of existence.

We're still not hitting the marks with this series, it's still ok, but it's not really grabbing me.

It might however find itself being grabbed by a laboratory of irate Scientists who want to give it a very loud lecture...