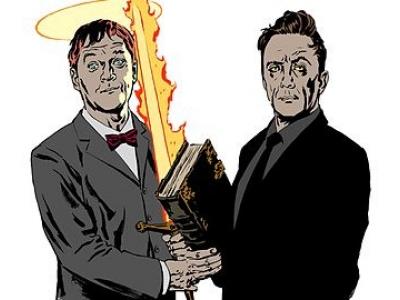 Did all of of the attempts to avert Armageddon ultimately prove fruitless?

Someone who IS telling is Agnes Nutter. Her ancient predictions may be badly spelled, and a bit obscure, but they're bang on (a suitable phrase for Anathema and Newton). Her predictions have now directed several characters to Lower Tadfield for the final confrontation.

There are others whose directions are a little more Infernal.

Now back down to the four original Horse-biker-men-woman of the Apocalypse, Death,War,Famine and Pollution are trying to trigger World War Three.

This involves getting access to a US airbase to start the Nuclear countdown. Everyone else is not looking forward to becoming charcoal briquettes, which sharpens peoples cognitive skills and intuition immensely.All of the pursuers work out where the END is going to start.

Mind you it can't be a great leap of logic can it? Want to start WWIII, you're going to need weapons of mass destruction or some way of getting to the people who can provide them...hmmm, I wonder where that could be?

The security at the airbase proves to have more holes in it than a donut shop. This ends up in a standoff with yet another set of Horse-persons of the Apocalypse.

The moral of which is :-

Never underestimate a girl with a stick.

Unfortunately, standing up to Satanic plans does tend to attract the attention from Above and Below, and regardless of the intentions or actions of the Earthbound characters, this is the BIG showdown, it's LITERALLY a conflict of BIBLICAL proportions. Both Heaven and Hell send representatives to cajole things along. You know...if we're not careful things could escalate!

So is the last episode worth the build up?

It certainly feels dramatic, and it has some parallels with another Epic tale (more of that in a moment).

The extended episode time is necessary to contain the climactic nature of the showdown, by splitting this up it would have caused some issues with pacing in the latter half.

Again there are some elements that struggle on radio. When the top Hellish player appears, there are some fairly expansive sound effects, but they can't properly convey what's going on, things get a bit confusing, and having read the book helps immensely. Without that book knowledge it is no large stretch of the imagination to hear many listeners uttering a bemused "Eh?"...

And back to the comment about comparisons about another EPIC tale? Which one? One of the biggest !

The Return Of The King.

Wow, you're thinking, praise indeed. No. I'm comparing the endings. Not comparing emotional depth or tragic consequences. The comparison is the length. The ending seems to go on and on. It's definitely in line with the book, so what it does do is show that you're prepared to put up with a completely different pace on the page than in the ear.

Now the series is over what did i think?

Despite flaws (slightly clunky start, a few dodgy accents, some elements didn't work in a purely aural setting and a central performance that doesn't fit with my vision from the book), it grew on me and the last half of the series was an improvement on the first.

There is a BBC version being released as CD and download which includes around 50 minutes of extra performance, this might improve matters further.

With all predictions now over i can only venture an opinion. A choice if you will.

And if I must make a choice, my decision is to,listen again.

After I've re-read the book.