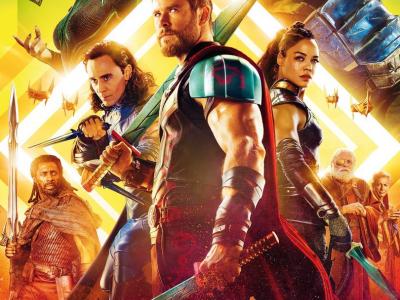 Building up to the next instalment of the MCU, I couldn’t help but have a few worries. Yes, Marvel make great movies but, also yes, they have a few reoccurring troubles which I wasn’t sure if this film would avoid or not. Rather than posting the concerns, I thought I’d review the film considering them. I’ve linked to the full details of those concerns in an appendix/footnotes style. A few very minor spoilers ahead but let’s get on with it.

Worry 1: the plot with be fragment and/or chaotic (1)

We are introduced to a Ragnarok storyline with a thoroughly well embedded Planet Hulk subplot. The two are weaved together nicely and Hulk’s story does not feel gratuitous in the slightest. The story itself gives us some idea of what Thor and Banner have been up to for 2 years as well as the status quo of Asgard in general. The pacing is fast but this does not put off the viewer at all. Through the introduction of Hela, we are granted an expanded glimpse into the history of the Asgardians and the nine realms. The story takes us between hell dimensions, Asgard, Midgard, and Sakaar and all are with sensible purpose within the immediate and grand story. There are wonderful cameos from Dr Strange, demonstrating swiftly his rise as a sorcerer, as well as surprising cameos from actors across the film (not to mention a rather brilliant Stan Lee one). Overall, most concerns regarding plot were addressed and I am thoroughly happy with what I was presented.

The main weakness of the plot came associated with the villain and the familiar use of 'drones of the bad guy'. Avengers Assemble, Age of Ultron, and The Dark World have all employed this and whilst that isn’t the majority of MCU films it is a little too easy. I just think of personal showdowns including Winter Soldier, Civil War, Homecoming, and the left-field Dr Strange for excellent and memorable fights. It’s not even that it was ill-fitting of the character and it did bring some wonderful action shots, but I would like to have seen something different.

Worry 2: the characters would be flat or repetitive (2)

On almost all accounts we are introduced to well-rounded characters and returners are given some decent development. We meet Thor who is now more self-assured, smarter, and a lot funnier than he was before. He receives quite the character blow via the means of his hammer and spends the film learning how to grow further and develop without his favourite toy. We meet Loki still up to his self-centred games but across the film transitions to allegiance with his people. This was a great development to see as finally we may have some semblance of redemption for the Lord of Mischief. Hulk is superb. Banner has been gone for two years and in that time the big guy has learned control and basic language. We see in the portrayal of his character some of his struggles over the missing time and that’s wonderful. We also get a glimpse at the Banner-Hulk psychological tension and whilst that would have been nice to expand upon this wasn’t a Hulk movie.

Our newest entries Skurge and Valkyrie were also a delight. The former is established very quickly as having been on the scene a while and goes through an arc of henchman status, albeit it with some concern for his decisions. He isn’t given a huge amount of time but there’s still enough to latch onto the character. Valkyrie is very well done, and I hope that she isn’t a one-film wonder. Through her conflicts with Thor we get backstory very organically and it lets you feel sympathy for her through some ill-actions. Hemsworth, Hiddleston, Ruffalo, Urban, and Thompson are all superb in their roles which is a testament to not only them but the writing and direction. There are a few secondary characters I won’t spend much time on (just look out for the Grandmaster and Korg) but my main concerns were alleviated, until…Hela.

Hela wasn’t bad, far from it, and she wasn’t portrayed in a simple plot-driving way like some of Marvel’s weakest villains. She came with backstory and motive and at times you could feel for her. She was also sublimely portrayed I should add by Cate Blanchet. She fell a little short in that she had no part that wasn’t leading to the final show down. It would have been nice to experience other aspects of her character, such as where she’s been and her experiences etc. I assume this came down to with an already complicated film trying to expand on her story more would have established too many narratives.

It was a massive reveal in the trailer that Mjolnir would be destroyed, and my biggest concern was that they would just rebuild it and thus undo that character shattering moment. Marvel have a few cases of making a high impact decision only to override it later for plot reasons. I am very much hoping that we don’t see the rebuild of the hammer and that Thor learns to be without it. There are also lasting implications of Ragnarok for Asgard but also following on from Thor’s vision of Infinity War. At this point I can’t attest to much as very little direct seeding was done in this regard. We can only look forward to future films to see if they gloss over some of the significant points of this movie to make future ones easier to make. I sincerely hope not as one of the most of amazing things in these films is seeing characters genuinely develop and then when they combine you get clashes of ideologies and the such. To see the impact of Raganrok brushed under the carpet for its key players to just go back to how they were I Infinity War would be an utter shame.

Overall, Ragnarok is an absolute treat and is so utterly hilarious (I was holding my mouth to quieten myself in the cinema!) that it’s basically an action-comedy. It does this, though, with grace enough to not detract from the important plot and character points needed from such a huge storyline. Waititi has brought us a wonderful development of the Thor character and stories in an altogether funnier, slightly camp, and almost self-aware way. The influence of his prior work is clear but not gratuitous. It’s another example of the brilliance which comes when Marvel takes risks (a la James Gunn and Guardians). I’m holding out for the longevity of the film though and hence the rating. 8/10 is a solid “great” and with a more detailed villain with fewer drones I’d have pushed for a 9. Upon second watching, the film may fall flatter if you know the jokes are coming but if that’s not the case then with the villain problems fixed I think we’d have been looking at a near perfect score.

1.      This film is attempting to run storylines of Ragnarok, Planet Hulk, and an Infinity War prelude, all whilst coming in with the shortest run time to date of any MCU film. This strikes hard at the attempts of Ultron and how they fell short of keeping a solid story together. I can’t help but worry that we’ll be left with a film serving to wrap up and seed by means of The Grandmaster and Hela rather than the epic buddy road trip of Asgardian-destruction to conclude Thor’s individual journey that we deserve.

2.      Marvel is notorious for their underdeveloped villains who serve as nothing more than to drive the events of the heroes. Whilst I don’t agree with the full weight of criticism they receive (they have been some absolutely great ones), I do concur that even in Guardians 1 which is arguably the best MCU film to date the villain is nothing more than a story-driver. Hela is the goddess of death, possibly tying-in to Thanos and the infinity stories, has Asgardian backstory, and is serving as the one who overturns Asgard. Thus, she cannot fall short as a villain in this all too important movie. Reducing her to a story-driver would be nothing other than a waste of amazing potential. Thor and Loki are well rounded and utilised characters so far so there’s little worry about them in this coming film. What would be nice is to not see Loki flip-flop so much and have a true redemption arc. I worry that Loki’s role would be used to flip the pace and direction of the film in a way like the use of Magneto in the recent X-Men films. Regarding the Hulk, the fact that he’s been without the other guy for two years gives up some interesting development as it is. I worry that they will gloss over this and just have us at a point of Banner and the Hulk being one with each other. One of the most interesting aspects of this character is the inner turmoil Bruce goes through coming to terms with the Hulk and how eventually embrace both parts of himself grants him control. I think we need to see some of that journey for Bruce as it continues the struggles and guilt he felt through the events of Ultron.

3.      Taking away Mjolnir is one thing but as with superhero deaths they could simply bring it back for plot reasons, right? This is a genuine worry of mine that in this film or the next Thor will magically be back in possession of his favourite toy and this is the last thing they should ever do. The loss of Mjolnir amounts to symbolic castration of the Thor character. Upon becoming worthy, he was granted enhanced power and the strength to wield the hammer (and all the flying and weather powers which come with it). It comes as a power but also a crutch of his as he acts with very little gusto without it. Its offhand destruction is such a demonstration of losing that power and it forces Thor to relearn how to stand without his crutch. Stripped of Mjolnir, he must re-learn how to stand for himself in other ways, be it combat or other weapons. That clip from the trailer not only shows the strength of Hela and that she means business but also signifies a drastic turn in the development of Thor. Returning the hammer to him in this film or Infinity War (the latter of which is plot-positive due to casting) would completely undo any of that impact for both the grand-plot or Thor’s character development. That’s not to say that he should be without weapons, but that there should be a demonstration of him acquiring and mastering another weapon to aid him in the grand fight.