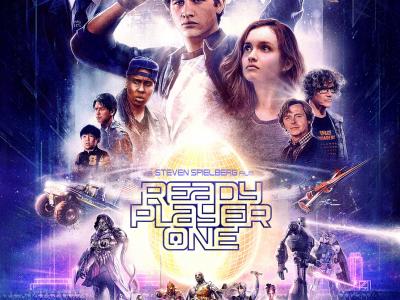 It's been a long time coming. We've been talking about this film for several years now, and the book for even longer. We even went as far as to compile the Ready Player One Film Challenge which we attempted and failed not once, but twice. So, it's fair to say that we've been anticipating this one for quite some time. The book is a love letter to the 1980s and everything about being a nerd. Games, films, books, TV shows. All the things that I, and countless others, have immersed myself in over the last thirtysomething years.

Going into the film, I was nervous. Having seen the trailer and the posters, there were a few things that didn't sit quite right with what I knew of the source material, yet I wanted to remain open minded.

The opening scenes do a good job of setting up the world as it exists in 2045 and giving us our first glimpses of the OASIS. It's a rich, vibrant virtual world that looks amazing and the initial flyover contains more nods to existing franchises than most movies do in their entire runtimes. The scene is set that, five years previously, the creator of the OASIS, James Halliday, died and left a message that he had hidden an easter egg somewhere within the OASIS. The first person to find three keys and then, the egg itself, wil win sole ownership of the OASIS and millions of dollars. Now, five years later, interest in the egg hunt has waned for all but the most hardened Gunters (Egg Hunters: YAY!!!) and the IOI (Evil MegaCorp: Booo!!!).

What follows is a series of challenges and puzzles that the core group must overcome and solve while, along the way, making friendships and enemies both within the OASIS and the real world of the Stacks. If that sounds a little oversimplified, it's because it really is. The movie jumps from plot point to plot point at breakneck speed, with set pieces that resemble  moments from the novel being re-purposed and used in a slightly different context to push the narrative along. Where I was anticipating the majority of the film to take place in the OASIS, I was surprised that there were a lot more Real World shenanigans happening and, despite all that, I still came away with the feeling that we didn't really get to know half of the characters as well as we could have.

Like the source material, the references, homages and cameos are non-stop and feel, at times, a little overwhelming. The culture shock of seeing avatars of Hello Kitty wandering around in the same shots as Robocop and Marvin The Martian are definitely jarring and contribute to the slightly chaotic feel of the film.

The action does seem to get a little stuck in the middle act and there are far too many moments where the plot suddenly turns on a realisation by one of the characters that comes literally out of thin air. Also, despite the fact that the OASIS covers the entire world, it seems a little too convenient that all the main characters turn out to live within a few miles of each other and can turn up to lend a hand in real life at a moment's notice.

Performance wise, everyone puts on a good show, with notable performances from Ben Mendelsohn as Sorento and T.J. Miller as I-Rok. Tye Sheridan gives an earnest performance as Wade/Parzival and Olivia Cooke is excellent as Art3mis.

The film as a whole looks and sounds great, even if the score is a little too classic for my tastes. I think that is my overall issue with the film though. It feels like a classic Spielberg movie: A group of kids, thrown together, trying to overcome overwhelming odds, facing danger at every turn. But, in a lot of ways, that's not what I wanted to see from this movie. I wanted to see something fresh that had allusions back to the media of the 80's, rather than an 80's style movie with a shiny wrapper and more pop culture nods than you can shake a stick at. I feel like I wanted to see what Edgar Wright would have made of the film, with a soundtrack compiled by Trent Reznor or something along those lines. Plus, I think it strayed away from the idea in the book that the Gunters embedded themselves utterly in the 80's lifestlye and that was what would ultimately lead Parzival and friends towards their goal. Instead the decision was made to opt for quick exposition to further the plot.

If this all sounds a bit too much like the rantings of a butthurt fanboy, I will own that. I am. I think this film barely scratched the surface of what should have been a joyous celebration of pop culture and nerdity and instead delivered a half-decent, shiny adventure flick. I'll just go back to listening to the audiobook for the nth time and let the dulcet tones of Wil Wheaton lull me to sleep before I try the film challenge again. For the rest of you... By all means go and see it, but then take the time to read the book... You won't regret it.