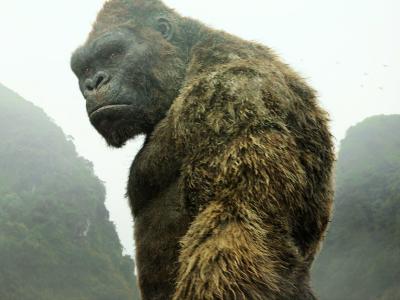 Set in the world of Godzilla (2014) but way earlier during the cold war, an unmapped island is discovered and a team set up to investigate it. Before long, they are accosted by giant gorilla and settle in to discover that the island is full of gigantic versions of animals, a peaceful human tribe, and ruled by Kong himself. Now…I wasn’t excited by this film (nor interested at all) as I’ve never been a fan of monster movies and the first in this universe quite frankly sucked (Broderik’s Godzilla is perhaps the exception). But a raving review from a trusted friend, a reasonable trailer, and a cast consisting of half of the Marvel universe persuaded me to give it a go. I was not only not disappointed but actually impressed with what followed, for reasons I’ll outline below.

Overall, the film was good at balancing the serious storytelling with humour whilst never actually descending into a comedy. It carried tones humans overstepping their boundaries into things which they don’t understand as well as trying to control them; the balance between respect and control. It has some of the feeling of Jurassic Park 3 (a positive, coming from me) and contained obvious but not cartoony CGI.

The plot is rather simple, a survival/rescue mission, whilst focusses surprisingly on characters rather than action which is refreshing. That being said, the action-heavy scenes were also intended to be there to create tension which I feel it didn’t pull off (with one exception). The major losses are of underdeveloped characters which we haven’t connected with which leaves it a little anticlimactic. There are, however, some particularly touching moments too. The show down is more engaging than its cousin in Godzilla since the film establishes involvement and care for at least one of the two involved. Until in Godzilla where it’s essentially a monster fight in our backyard (a la Man of Steel). The characters are humanised with depth and intrigue, at least the primary ones but the human antagonist is more just there to drive the tension (which we’ve already established isn’t pulled off as well as it could have been). A nice positive, though, is that the British one isn’t the bad guy for once!

I enjoyed this far more than I expected and it has rescued my potential interest in the coming monster universe. Here’s hoping Godzilla 2 isn’t a let-down.