It's not just grim up north

It has been absolutely awful the last couple of days. The river outside of our house nearly spilled over again. We came within a couple of inches of being flooded during the last lot of bad weather. This is what it looked like from just inside our front door: 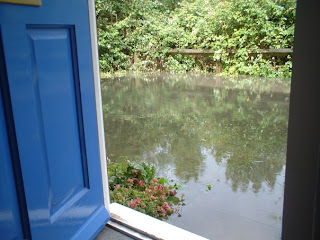 Thankfully it wasn't quite as bad this time and the river didn't actually spill over onto the path.

I must say how much I love roleplaying. It's been a hobby of mine for over 20 years now, and it still hasn't lost it's appeal. Now I'm not talking about Dungeons and Dragons here where me and a bunch of my friends sit around battering orcs and collecting gold pieces and xp. At the moment we're playing a game set in the future but in a parallel universe. It's basically futuristic magical steampunk, which is awesome, lots of airships and the like. We've just discovered Atlantis and it turns out that it might be Hell.

I'm still having problems with my wireless network and Linux. I've managed to get it all set up and working, but when I try to use the WPA encryption my laptop won't connect. So I'm left using MAC address filtering which ain't very good if anyone nearby knows how to spoof a MAC address. Despite much googling I still can't seem to get it to work using iwconfig. Hmmm.... Ah well... I'm sure I'll crack it eventually.

I ran into another odd problem the other day while transferring old VHS tapes onto DVD. There appears to be some sort of archaic copy protection system that will not allow me to back up my videos onto dvd. As soon as I start the tape playing and record on the dvd it says 'Copy Protected' and stops the recording. I guess I've become so used to ripping cd's and dvd's that I'd completely forgotten that copy protection is such an issue.

Only for weeks now until we go to Paris or our 5th anniversary. Can't wait, I'm going to have to see how much it's going to cost to do the Eiffel Tower and the Louvres.